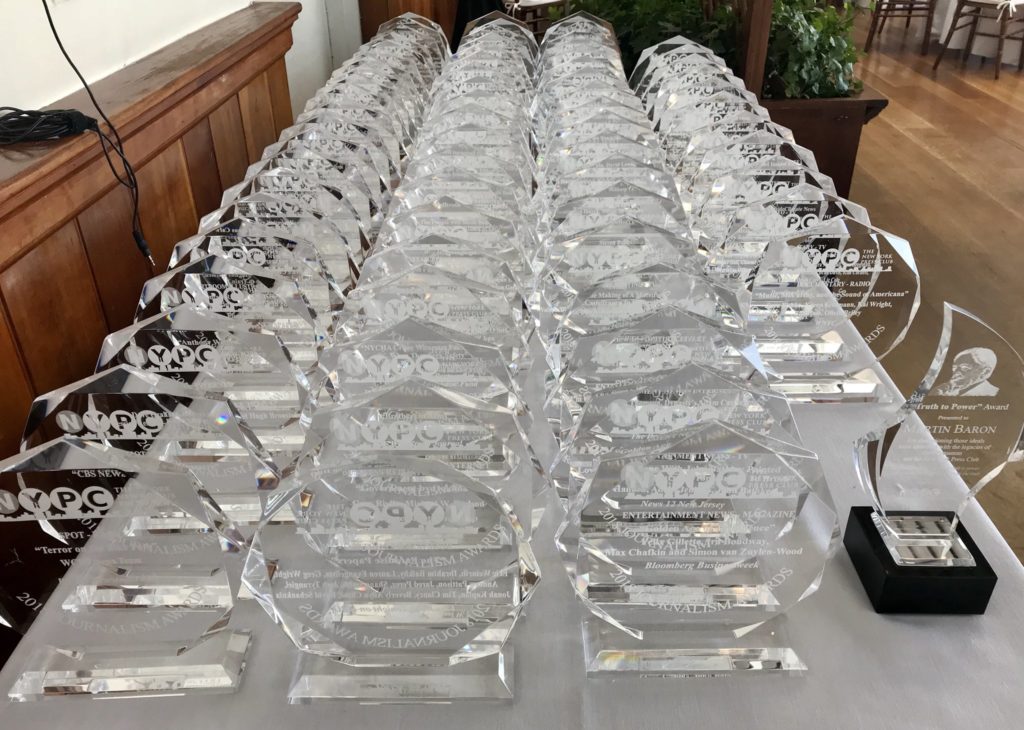 News Beat podcast clinched the highest honor for podcast excellence among journalists and media outlets throughout New York City and across the United States at the 2021 New York Press Club Journalism Awards.

The annual competition and awards ceremony—an enduring tradition in New York media—honors journalistic superiority across diverse categories by writers, reporters, editors, producers, photographers, videographers, multimedia creators, news sites, and publications. This year's contest spanned more than 30 divisions, with nearly 600 entries submitted by TV and radio stations, newspapers, websites, magazines, and newswires in New York City and around the nation. Judges consisted of prominent current and former journalists, and academics, selected for their expertise in each category.

This is the second time the News Beat podcast crew has earned the coveted and prestigious best podcast crown—judges bestowing it on the team in 2018 as well. There were no other winners in this category this year.

"We had a record number of contestants this year, all from stand-out reporters, editors and producers," stated New York Press Club President Debra Toppeta in a press release announcing the winners. "During a difficult year with numerous challenges, the work of journalists continued at a high level, a testament to their dedication to the profession."

“I'm looking right now in my apartment at a poster that we made in 2015 with some colleagues that list 100 Black women and girls killed by police, and there are 5-year-olds on this list,” Ritchie told News Beat.

Founded as the New York Newspaper Reporters Association in 1948, the nonprofit New York Press Club (NYPC) consists of current and former members of the news media and news organizations ranging from television, radio, wire services, daily newspapers, weekly and monthly publications, and online sites, as well as professionals from the fields of communications, public relations, and public affairs. It represents working journalists and media professionals and vows to “protect the rights of all reporters while providing networking opportunities for journalists and communications specialists to discuss professional issues and affect change,” declares its mission statement.

Launched in 2017, multiple-award-winning News Beat podcast shines a light on underreported and oft-ignored social justice issues through a unique blend of independent journalism and independent hip-hop. Every full episode features interviews with academics, activists, and other experts—masterfully melded with original performances by an ever-growing roster of extraordinary hip-hop artists.

"#SayHerName: Confronting 400 Years of State Violence Against Black Women" did not include an artist performance, yet rather, an incredibly moving sonic tapestry threading together music, historical and present-day audio clips, and Jacobs and Ritchie's voices—intimate, informative, and impossibly heartbreaking.

The episode was also recognized as one of  '100 Outstanding Podcasts From 2020' by the respected podcast publication and newsletter The Bello Collective.

"This episode of News Beat doesn’t feel like a podcast with music; it feels like listening to music and a podcast at the same time," commented a judge. "The voices of experts, victims, family members, activists, and news outlets are expertly collaged together, with a constant, but not monotonous, steam of music underneath. The episode’s construction is outstanding, but the story, of course, is horrifying. And as one of the voices says, this is only 'a glimpse at the range' of violence inflicted on people of color."

“We are sincerely humbled and extremely honored to be recognized among so many other extraordinary journalists and media outlets. We hold the New York Press Club in extremely high regard, and this remarkable distinction is testament to the vast talents and enormous hearts of not just the News Beat podcast and Morey Creative Studios team, but the dogged relentlessness and infectious passion of the guests we are so privileged to have featured on this critically important episode. They have dedicated their lives to ensuring the countless victims of racism, police brutality, and institutionalized inequality are Never forgotten, and we dedicate this award to them, along with all those named and unnamed women and children slain simply because of the color of their skin.

“This episode provides but a glimpse into the sheer horrors wrought upon Black women and girls from the founding of this nation on through today. We implore you to learn more about this issue, and get involved. We must all collectively and individually do our best to bring more attention to the #SayHerName campaign and all those women and young children who have been killed by a historic and barbaric barrage of violence against them. This systemic, perpetual storm of brutality must be further exposed and stopped, and all its victims remembered and honored. We call upon mainstream media outlets to join us in doing so. Please, fellow journalists, cover this topic—put it deservingly on your front pages and homepages. Listeners and readers, as a veteran investigative reporter once advised me: Never Lose Your Sense of Outrage. Fight like hell against these injustices."

Banning the teaching of a so-called Critical Race Theory could create a chilling effect that prevents educators from exploring racial issues in America.